Three C's of Acting and Voice/Bodywork 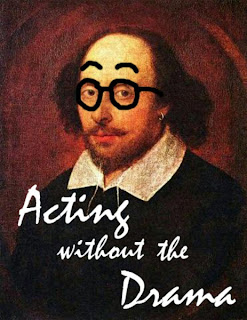 IMPORTANT STARTING DATE CHANGE FOR THE THREE C'S OF ACTING CLASS! The Tuesday (Three C's of Acting) Class will now begin on Sept. 22nd. It will start at the normal location, but then move to the Echo Theatre after the first week.

It's that time again! I'm starting up two more classes starting mid-September, and I would love to have you join us!

The Tuesday class will focus on the Three C's of Acting, which is my specific approach to the art of acting. The other is a new class, and one that I'm very excited about. It's a Voice/Bodywork class, which is designed to help with vocal clarity, resonance and ease of use for the actor, as well as working on alignment.

For those who have taken the Three C's class before, you'll know that it's gentle, but never comfortable. It does well for actors who are just starting out, as well as those who have been working and studying for a long time. I enjoy having a mix of experience levels in this class, as it enhances the environment for everyone.

For the Voice/Bodywork class, we will be using elements of the Alexander Technique, specifically geared toward alignment, but modified and refocused to build your "presence," "charisma," or "personal magnetism." In addition, we will use Linklater voice exercises, combined with some other innovative approaches, to get to your natural voice... your own, specific, powerful instrument.

So, Three C's on Tuesdays 7-10pm. Voice/Bodywork on Saturdays from 10am-1pm.  The Voice/Bodywork class will be happening in Provo at 308 East, 300 South. It looks like a house, but it's got several different spaces inside. The one we'll be using is what was once the garage--take a right as soon as you walk in the front doors, and go through the kitchen and the door on the right that leads down the stairs.

The Three C's class will start at the same location, but will move to The Echo Theatre (15 North 100 East, Provo) on the second week.

To sign up, please go above to the PayPal drop-down menu and either select the Three C's (or Voice/Bodywork) full amount or deposit option. Full payment is $165 for the 6 week course. The non-refundable deposit is $35. If you make a deposit, the remainder of the payment ($130) will be due on or before the first day of class.

For those who might need some flexibility on payment, contact me (actingwithoutthedrama -at- gmail -dot- com) with a payment plan already thought through. I'll let you know whether or not it's something I can work with.

Enrollment is limited (I like to keep the classes small), so make sure and sign up quickly! Your deposit insures your place in the course. If the classes fill up, I'll refund your deposit fully.

A note on tuition: you are signing up for the entire course. If you have to miss a class, you won't be refunded for that day. You're encouraged to clear your schedule for the entire 6-week course.

For those already signed up, make sure you bring in a one-minute monologue (memorized and ready to perform) for the Three C's class, and dress in comfortable clothes designed for movement for the Voice/Bodywork class.