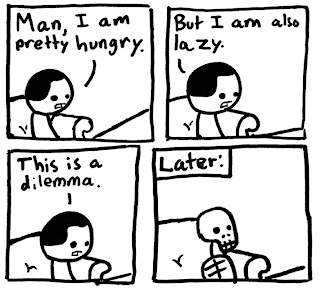 We've all heard that word.  Some of us have even had it pointed at us from time to time.

Here's the weird thing, though.  I've been teaching acting for over ten years and I have yet to meet a lazy student.

Don't get me wrong.  I've had students that didn't do their homework.  Ones that wouldn't work in class. Ones that were downright disruptive with their lack of participation.

Not a single one was lazy.

There's something you should know about me (if you don't already):  I love acting.  I don't just love acting, I love teaching acting.  So when I see a student behaving this way, my natural curiosity is piqued.

Another thing to know about me:  my curiosity is quite strong.

So, rather than rant and rave at these supposed miscreants, I did something crazy.  I talked with them.

And without exception, every single one of them confessed to me that their dearest desire was to become a successful actor.  They were also aware that their current behavior was not helping them towards that goal.

This is normally where the word "lazy" gets thrown around.  Well, obviously these students are just lazy.  They aren't willing to put in the work necessary to become successful.

But, thing is, that's just not true.  Because when I would start working with these students one on one, they would put in some serious hours trying to improve.

After many conversations with these special students (and I'm not using the word "special" in that sarcastic hey-there's-something-wrong-with-that-person kind of way), I realized that what was keeping them from engaging was fear.

They were afraid to fail.  See, if they're not really trying, it somehow doesn't feel so much like true failure.  Of course, there's an uncomfortable truth in there.  If you don't really try, it's kind of hard to find success, especially in an industry like entertainment.

Now that's what was happening on the surface, but then I noticed that maybe it wasn't the whole story.  Because as these actors began to engage and really work hard, I saw something else happening.  They were finding other ways to self-sabotage.  They were now trying, but were obviously still afraid of something.  They were succeeding in the craft, but finding personal (and more subtle) ways to make sure that professional success eluded them.

I think the truth is that we're all afraid of success.  With success comes acclaim and public visibility.  We're now on a much bigger stage.  A stage which, on some level, we're pretty sure will be the venue for our ultimate humiliation and defeat when we're exposed as the hacks and frauds we truly are.

This, of course, isn't true, but the negative voices in our heads are pretty sure that it is.  And they work below the surface to make sure that their version of reality is what happens.

So what can we do about it?  Well, the only thing that I've found that works is to acknowledge those fears when they crop up.  And how do we know when we're scared (because sometimes it isn't obvious)? It's usually when our focus narrows and turns inward.

The choices that we make when we're scared are usually pretty destructive.  When we're connected and looking out, those choices tend to lead us on to some pretty spectacular things.

Seems like pretty good motivation to me.
Posted by Ben at 6:22 PM